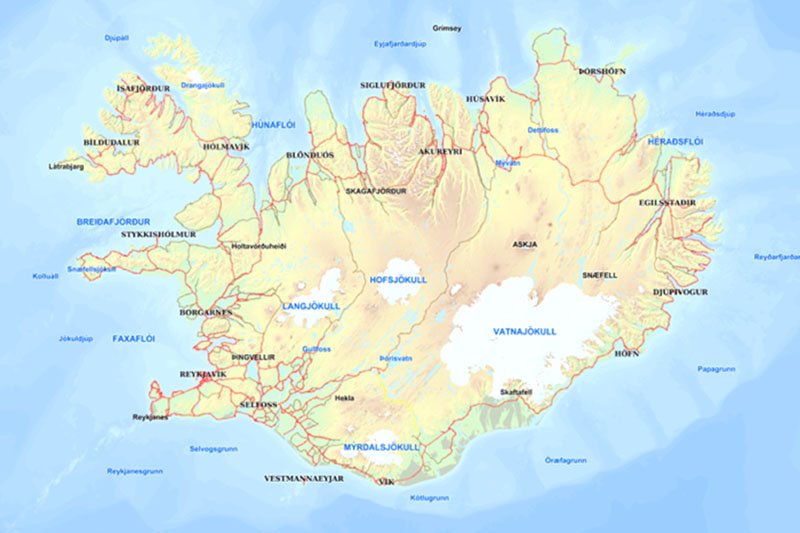 At GJ-Travel, we always had a passion with maps.

Guðmundur Jónasson, the founder of the company, contributed to change the way we understand Icelandic cartography in the highlands and central Iceland in general. By venturing with his first buses on unknown paths he opened for all Icelanders and tourists’ new roads. His scouting and passion for adventures are the reason why the most remote parts of Iceland are now accessible for our visitors.

Along with the saga literature, cartography has been important to Icelanders. We say “us” as opposed to “them”. Going abroad translates by “going out(side)”. It has always been important to Icelanders to localize themselves within their worldview and the rest of the world. If the sagas are telling us stories of how the Icelanders perceived themselves within their world, the maps are showing us and telling another, and nevertheless complementary, story.

Now let’s go back in time and see how Iceland used to looked like for the Icelanders.

The most famous Map of Iceland has been realized by the bishop Guðbrandur Þorláksson in 1590. In 1590 Abraham Ortelius published a new supplement, Additamentum IV, to his collection of maps, Theatrum orbis terrarum. Amongst the new maps is a map of Iceland (Islandia).

The author is not mentioned but on it says that it was engraved in the year 1585. On it we can also find a dedication to Frederick II of Denmark by Andreas Velleius (Andreas Sørensen Vedel); a well-known Danish historian of the period. The map is so superior to all earlier maps of Iceland in content and execution that an Icelander must be its originator. All clues point in the direction of Guðbrandur Þorláksson , bishop of Hólar. In his school days in Copenhagen he had studied mathematics and astronomy alongside theology. He had calculated the position of Hólar and arrived at an amazingly accurate result. He made a map of the North in 1606. The map of Iceland by bishop Guðbrandur does no longer exist and it is not known when he made it or what resources he had at his disposal. A list of churches and fjords has been found which he seems to have used, especially the latter, which he follows very closely for a large part of the coast. It depicts the quarters of Iceland (fjórðungur) and surrounds the islands of mythical creatures pertaining to the common bestiary of Medieval Western Europe.

In the late 16th century a young teacher from Skálholt, Sigurður Stefánsson, attempted to use the available documentary evidence to mark the sites of the ancient Norse discoveries in the western Atlantic, including Vinland, on a map. Sigurður was the grandson of a Skálholt bishop. After studying at the University of Copenhagen, Sigurður became a teacher at the former monastery of Skálholt, which remained the religious and educational centre in Iceland even after Protestantism was introduced in 1551.

His 1570 original no longer survives. A copy was made in 1690 by Þórður Þorláksson (also known by his Latinized name, Thorlacius) the Bishop of Skálholt. By matching latitudes with the British Isles, the map shows the northern tip of “Vinland” as being at (51°N), the same latitude as the southern tip of Ireland and Bristol, England. This information was transferred to more modern maps. This indicated, among other things, that the promontory of Vinland was marked by Stefánsson at the position of the northern promontory of Newfoundland, which was one of the factors that encouraged the successful archaeological investigations in 1960 at L’Anse Aux Meadows (51°N). This map is famous for the localisation of the place-names of the Norse settlement in North America as depicted in the famous Vinland sagas.  Based on the saga descriptions, the author indicates that Helluland includes Baffin Island, and Markland represents at least the southern part of the modern Labrador, there has been considerable controversy over the location of the actual Norse landings and settlement. Comparison of the sagas, as summarized above, shows that they give similar descriptions and names to different places. One of the few reasonably consistent pieces of information is that exploration voyages from the main base sailed down both the east and west coasts of the land; this was one of the factors which helped archaeologists locate the site at L’Anse Aux Meadows, at the tip of Newfoundland’s long northern peninsula.

Almost a century after, a cleric named Björn Jónsson from Skarðsá established a description of Greenland (1669), primarily known for its hand-written maps, of which the so-called “Skálholt Map” is the most famous. An addendum in Latin gives a description of Greenland by Theodor Thorlacius. A copy was made in 1690 by Þórður Þorláksson (also known by his Latinized name, Thorlacius) the Bishop of Skálholt.

Last but not least the famous Vinland Map, claimed to be a 15th century mappa mundi with information about the Norse settlement of North America. In addition to showing Africa, Asia and Europe, the map depicts a landmass south-west of Greenland in the Atlantic labelled as Vinland (Vinlanda Insula). The map describes this region as having been visited by Icelanders in the 11th century, as per the saga’s depictions.

Although it was presented to the world in 1965 with an accompanying scholarly book written by British Museum and Yale University librarians, historians of geography and medieval document specialists began to suspect that it might be a fake as soon as photographs of it became available, and chemical analyses have identified one of the major ink ingredients as a 20th century artificial pigment. Individual pieces of evidence continue to be challenged, most recently at a 2009 conference.

Simply give us a call. We have a team of travel specialists that are here to help you.